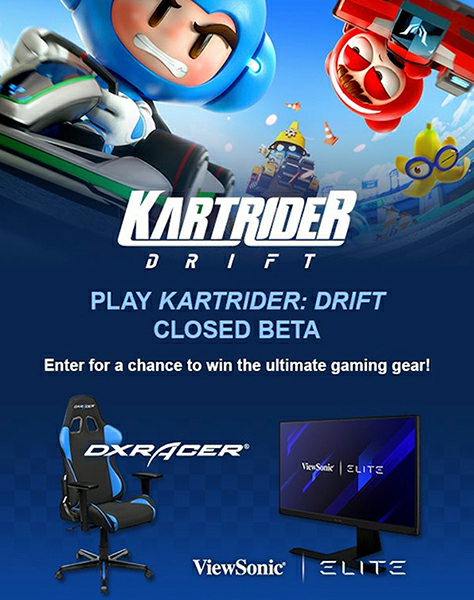 Players invited to the second Closed Beta will receive an acceptance email, and they can pre-download the game starting on June 1, 2020 at 7 p.m. PDT. Players who participated in the first Closed Beta will automatically be included.

During the Closed Beta period, players will be introduced to a new character — Diz, as well as new skins for existing characters, plus additional karts and tracks. The Closed Beta will also showcase new functions such as Racing Pass and a new Racing School single-player mode, where new and experienced players can improve their racing skills.

Customization will be a huge part of this Closed Beta with the preview of the new wraps, which allows racers to paint their karts and create unique designs for maximum personalization. Participants will also have access to kart upgrades including a choice of the license plate and can decorate their karts with a lineup of new accessory balloons and character emotes.

To reward players who log in during the Closed Beta, special login rewards including a Turbo Tortoise Kart, Bunny Buggy Kart, Simian Scrapper Kart, and Deuce Coupe Kart will be unlocked. All Beta participants will also receive a White Cloud Balloon item at the official launch.

Players who sign up for Closed Beta 2 at www.kartriderdrift.net will be in for a treat as KartRider: Drift has partnered with HyperX, ViewSonic, and DXRacer, for an opportunity to win exclusive prizes.

KartRider: Drift’s Closed Beta will be available worldwide on the Nexon Launcher, Steam, Xbox One, including Xbox One X, with the exception of Japan, and China on the console. To see a full list of available regions, please follow this link.

For more information on KartRider: Drift, visit www.kartriderdrift.net or follow @KartRiderDrift on Twitter for the latest updates and information on contests and giveaways.

Launched in 2004, KartRider is a massively popular multiplayer racing franchise that boasts more than 300 million PC players. Making its debut to western audiences, KartRider: Drift takes inspiration from earlier iterations of the game, delivering competitive drift-fueled racing action, featuring different game modes, and deep character + kart customization. Available completely for free on PC Steam, Xbox One, including Xbox One X, and Nexon Launcher (PC), KartRider: Drift offers cross-platform capabilities to challenge friends regardless of the platform they choose or where they are in the world.

Founded in 2005, Nexon America Inc. delivers outstanding free-to-play online game expertise and live game support, taking the strengths of NEXON Co., Ltd. (“Nexon”) and applying them for uniquely western audiences. Nexon America has consistently sustained iconic franchises such as MapleStory and Mabinogi for more than a decade, which has gone on to break records and captivate players. With new projects on the horizon, Nexon America maintains the pioneering and innovative spirit of its parent company, employing its player-first approach, while designing the best possible gameplay experiences for the western market.